The End of the World, the Beginning of an Era at The Copan Ruinas, Honduras 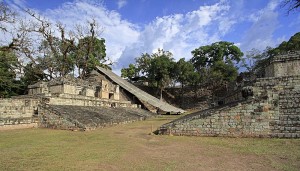 The Ruins at Copan, Honduras

Honduras – We got off the bus at La Entrada and a hopped into a collectivo taxi van that would take us the rest of the way to the town of Copan Ruinas, home of the famous Mayan Ruins of Copan. It was the afternoon of December 21st, the solstice, the final day of the 13th Baktun, and the end of a 5,120-something year cycle on the Mayan Long-Count calendar. Some said it would be end of the world. Most of us just knew it would be a good party, maybe with a tinge of spiritual significance. It would be a strange mixture of the devout and the demented – the worshipers and the weirdos  These kinds of once-in-a-lifetime celestial events bring out the freaks, the hippies, the artisans and the fire-spinning malabaristas in droves. Add a little bit of Honduran lawlessness and a healthy supply of cheap booze and marijuana (for spiritual and medicinal purposes only, clearly), and you’ve got my kind of party.

The collectivo taxi filled up and began its slow and churning journey towards the ruins. The road to Copan Ruinas is a twisted stretch of asphalt that winds its way through the jungle, past villages and small farms. Dirt roads split off and stretch deep into the jungle-clad hills towards settlements and farms. The green scenery is dominated by palm trees, ferns, vines, hillsides covered in maize  and a type of tree the locals call Piel de Gringo, or skin of the gringo, for its paper-thin, red bark that peels off like a gringo’s burned skin. The jungle comes right to the edge of the road, where it meets the asphalt, and an unbelievable amount of roadside detritus. The shoulder is littered with broken bottles, empty cigarette packs, and general rubbish – an all too common sight in Central America, where despite the abounding natural beauty, the locals still think it’s okay to throw trash out the window.

An ominous sky over Copan, as dark rain clouds creep in.

The rain had been falling softly for hours. We heard rumors of hurricane conditions in San Pedro Sula, where we had just come from. But here on the road to Copan, the skies were endlessly grey and the rain was quiet, but relentless. Perfect weather for the end of the world.

Despite the fact that the van was full, we stopped periodically to pick up more passengers who were waiting in the drizzle, in front of ramshackle huts on the side of the highway. Every seat meant for 2 became a seat for 3 and backpacks became seats in the aisles. It was a 14 passenger van, max, but I counted 20 people and 2 babies. Everyone was cramped, everyone was wet.

We passed a pack of vultures huddled together on the side of the road, some with their wings outstretched awkwardly, menacingly.

When we finally made it to the town of Copan Ruinas, it was clear that the place was gearing up for something big. I had been calling around and asking for input on the festivities for months, but no one seemed to know what the hell was going on. One hotel owner had told me a few weeks prior that all her rooms were booked, and everyone was asking what to expect, but that the Honduran government couldn’t give them a straight answer. “They told us it’s going to be a surprise,” she said, “but I think that might mean they haven’t actually planned anything.” I even wrote en email to the office of the Minister of Tourism, requesting information – no response. Well done working with the foreign press, guys.

A schedule of event posted for the Copan 2012 celebrations. Apparently, the Honduran Ministry of Tourism had been doing their job!

So I wasn’t expecting much, but on the edge of the city, we were greeted by the military police, who were limiting traffic in and out of town. The collectivo had to drop us on the edge of town, so we strapped up our backpacks and hoofed it into the madness. It was mid afternoon now, and the skies were clearing, the rain subsiding. We found our accommodation at Hotel Don Moises, and headed to the Parque Central to check it all out.

The place was packed. There were plenty of other foreign tourists, but the majority of the people there were Hondurans. They had come from all corners of the country to be close to the ruins on this important day in Mayan history. Everyone milled around the square expectantly, waiting for something to happen. There were dark-skinned, indigenous men in cowboy hats and jeans, the women dressed in traditional dresses, and there were modern Hondureños, wearing designer jeans and button-down shirts, and the children all ran wild, endlessly throwing firecrackers into the air to hear them crack as they ran squealing away. Vendors were set up everywhere —  locals were selling said fireworks, small Mayan statues, and even t-shirts that read “Copan 2012”. The hippie artisans had set up tables of handmade jewelry and were practicing their hooping and fire-spinning skills for after nightfall. You could buy bags of popcorn and cups of flavored shaved ice, hand-made with an ancient-looking crank. None of it particularly Mayan or particularly Honduran either – but it had the air of a festival.

A local man adds sweet syrup to a cone of hand-shaved ice.

We decided to kick things off with the traditional Mayan Baktun celebration of buying a bottle of cheap Nicaraguan rum at 3PM and start drinking at the hotel. I’d read that the actual celestial alignment would occur at 5:12 PM, and some of the few devout believed that if the world was really going to end, it would be then. But the ominous hour came and went while we were knocking back shots of rum in our hotel room – If there were a sign from the Mayan gods, it certainly didn’t penetrate our rum-soaked haze.

Myself and my two travel buddies polished off about two thirds of the bottle before venturing back out into the chaotic streets of Copan. The town was buzzing with anticipation, as the clock ticked closer to midnight — a more appropriate hour for celebrating celestial happenings. We met some Honduran Psytrance DJs who had come all the way from the Tegucigalpa, the capital city, to set up a rave in a paddock near to the ruin site. They’d be charging 150 Lempira to enter, about $7.50 US, and the tunes were promised to play from midnight until dawn.

At 10PM there was a cultural event near the entrance to the ruins. The Honduran Philharmonic was on stage, playing a beautiful and surreal set, as thousands of onlookers sat on the hulled on the hillside in the cool, misty night, watching performers in full body paint costumes perform modern interpretations of traditional Mayan ceremonial dances. It was quite a performance.

At the end, a woman stood on stage and thanked everyone for coming, reminding us all that the Mayan Culture was one that knew no borders. It was a culture that pre-dated the political boundaries that form the various countries of Central America as we know them now. It was a good speech – and a poignant one. It was a serious reminder that with the end of the 13th Baktun, we begin a new era. An era in which, perhaps, the Mayan culture could play a role in bringing the people of Central America together, regardless of country, culture, or religious affiliation. 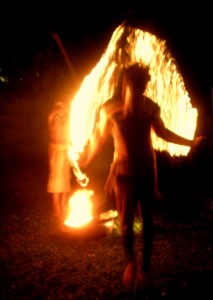 A young man, clad only in a loin cloth, jump-ropes with a chain of fire.

Back out on the street, there were performers spinning fire in loin clothes and tribal paint. Crowds gathered to watch as the young men filled their mouths with toxic fuel and blew plumes of fire towards the photographers who snapped away – and me with only my shitty point and shoot.

Rows of tiki torches lit the pathway to the entrance of the ruins, where you could pay $15 US to view the ruin site at night. Beer in hand, I flashed my press credentials at the entrance and told them that I had been in contact with the ministry of tourism and that myself and my associates (the beer-toting friends in line behind me) would like free entrance. “Pase adelante,” he said, go ahead.

We walked down the dirt trail to the center of the ruinas, lit eerily by tiki torches as the misting rain continued to fall. Over a thousand years ago, Copan was an important center of the Maya civilization. Archaeologists have dubbed it the Paris of the Mayas because Copan is home to more art and sculpture than any other Pre-Columbian city. The intricately carved stellae are famous, towering depictions of ancient rulers. At night, the Stellae were lit by the flickering flames of the surrounding torches. They were imposing, intimidating depictions of god-kings. The deep shadows morphed in the flames, making them even more menacing, and giving them one the feeling that they were perhaps upset that gringos would dare to drink beer and snap iPhone photos of them on such a solemn and significant night. 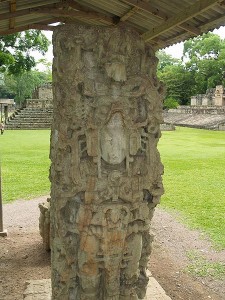 One of the many intricately carved Stellae on Copan. Photo via wikimedia commons, by Adalberto Hernandez Vega

We climbed the central pyramid and sat atop it, as the rain began to fall harder and the night grew colder. The torches flickered around us, casting strange shadows as we watched a few flashlight-wielding tourists wander through the ruin site, inspecting the stellae and pondering the famous hieroglyphic staircase on the other side of the grounds. My compatriots and I sat in the rain, atop that 1500 year old Mayan pyramid, staring off into the moonlit darkness while sipping our Cerveza Salva Vida and pondered the historical significance of that moment.

The city of Copan was once a thriving community of artisans, farmers, god-kinds, and commoners. And even 1000 years after the demise of that civilization, we still return to this site to contemplate the importance of the various histories and cultures of our world. With the end of every era, comes the beginning of a new era, which leads us to contemplate the cultures of bygone eras. And perhaps that’s the underlying purpose of this celebration. It’s not about the fire-spinning street performers on the street, or the hippies, smoking hash on hostel rooftops. It’s not about the psytrance rave happening in the adjacent paddock or about the artisans selling handmade bracelets to gringo tourists. In fact, it’s not about any of one those things, but about all of those things. It’s about the culture that we have created for ourselves, built on the backs of those who have come before us and augmented with the advancements of science and technology.

These festivals that celebrate cultures of the past also celebrate the culture of now. It’s part culture, part fiesta, part introspection, part diversion. I like to think that 1000 years from now, perhaps the next cultural generation will come to pay homage to us and our traditions. Perhaps they’ll drink beer on the roof of an abandoned skyscraper and ponder the importance of their own fledgling culture with respect to those that came before.

We climbed down from that pyramid after 1AM. We were the last people left at the ruins and we followed a hooded Honduran man down the line of torches, as he blew each one out, ceremoniously, yet somehow unceremoniously. We walked slowly towards the exit in the falling rain. We walked towards the street, towards the beginning of the new era, and towards a local bar to celebrate what was left of the evening with shots and camaraderie.