A cruise ship (left) and Seabus (right) on the Bosphorus in Istanbul, as seen from Gülhane Park near Topkap? Palace. The Dolmabahçe Palace is seen to the right side of the frame. Photo via Wikimedia, by M.K.T. Istanbul.

As more and more people catch the European travel bug, it’s become a trend to push your boundaries and head further East. Prague was once the unknown frontier turned popular tourist destination, but now, Eastern European destinations such as Istanbul are the new kids in town. I had to go.

Istanbul turned out to be a labyrinth of different floors, where some staircases didn’t lead to the same floors. There was a terrace on top with giant beanbags and many chairs with a bar serving drafts, kebabs, and nargilis (water pipes). I wandered through the modern part of Istanbul and came across what must have been a cultural dance show before I hopped onto a day trip that took us from the Blue Mosque to the Topkapi Palace and the underground reservoir.

My favorite part of my time there was when I took a ferry up the Bosphorus Strait to the entrance of the Black Sea. I would never have guessed Turkey to be so green and vividly colorful. I think I was expecting something closer to a desert. But the ferry ride was an interesting and cheap way to sight-see and before I knew it, I was dropped off on the Asian side of the river for lunch. 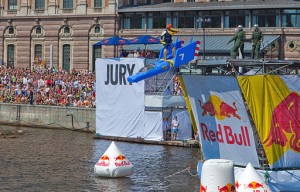 On my last day in Istanbul, I made my way over to the Asian side to find the Red Bull Flugtag. All week I had been seeing flyers for this goofy event where people make crude “planes” out of cheap construction supplies like PVC, various fabrics, duct tape, and paper. They take these contraptions, set them up on wheels, and run them off a ramp to see how far they get. It is reminiscent of the first attempts at flight a hundred years ago. The place was packed, and it took a while to find a good viewpoint. Because I’m bit taller than most Turkish people, all the kids-on-shoulders made a veritable human forest to look through. What a scene.

Although brief and only scratching the surface of the city, visiting Turkey just made me want to go farther east. It showed me yet again that cultures are beautiful no matter where they happen to be in the world. It was a completely foreign land to me, but the kind and jovial people there made it a fun learning experience. I’ll return someday I know, maybe en route to the far corners of Asia.

After 20 years of traveling with his dad, travel writer Rick Steves, exploring Europe independently and studying abroad during college, Andy is now pursuing his passion by helping students learn more about foreign cultures. His company, Weekend Student Adventures, allows students to dive into a culture, scrape their knees a bit, and make lifelong memories while visiting the most popular destination in Europe. Visit www.wsaeurope.com to learn more about his weekend student adventures!

Istanbul is one of my favourite cities in the world. I love it. Complete chaos, but the people are friendly, the food is superb, and it's one of the most diverse cities I've been to. Need to go back there!